Sockeye Salmon and King Salmon fishing on the Kasilhop river 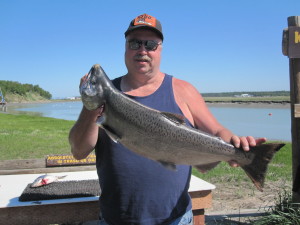 For the last two weeks we’ve been fishing every day for King Salmon.  We’ve been fishing on the Kasilof River. In this week gone past we got our peak fishing of the early runs King salmon and the fishing was fantastic.

On our best day we landed seven big King Salmons.  And we had some really good catches of salmon all week long. However, we have to report that for this time of year the fishing on the Kasilhof has slowed down quite a bit.

King Salmons have peaked and the second run of them has not started yet. With another poor return of early run Kings on the Kenai River the river has been closed to King salmon fishing until July first.

For the next ten days we will be aiming to catch a strong run of early season Sockeye Salmon. We expect to catch rainbow trout and we know that as always, there will be  should be some fun fishing trips!