Come and Fish this Amazing River with Jim 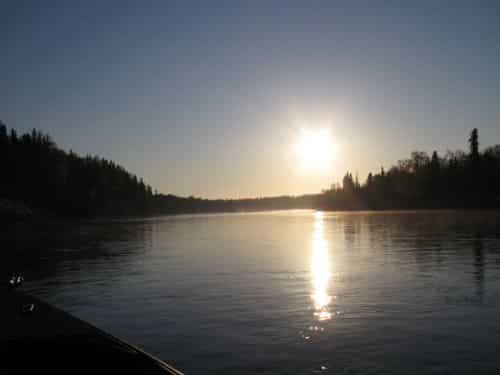 The Kenai River……where do I start?  I guess some back ground would be helpful so maybe somehow you could understand what this place, this river means to me.

I was born in Soldotna in 1966.  My parents had homesteaded here in 1953 my father a commercial fisherman and my mother a nurse. I grew up living in the town of Soldotna.  Our family home less than a mile from the Kenai River. Summers in the small town of Soldotna were perfect for a young boy riding bikes, playing in the woods, building tree forts and most importantly.. fishing at the river.

When the Sockeye Salmon, or Red Salmon, as we locals call them,  were running it was game on.  My friends and I would jump out of bed in the morning, grab our rods and back packs, jump on our bicycles and head to the river. Reds are awesome for kids as the action is fast and furious.  Reds run close to shore, are easy to hook and fight like crazy! I have burned up so many reels and broken many a rod fighting these fish.

Next came the Cohoe Salmon or silvers as locals call them.  I was a bit older maybe middle school age when these fish became a favorite target species. Like the Reds these guys love to fight hard with lots of acrobatic jumps, however unlike the reds, these fish require some skill.   Lure selection and presentation can make all the difference.  Location is also very important.  Silvers require skill to have success.  Silvers run in the Fall so August and September are the prime months.  When school started we would race home from school,  jump on our bikes and race to the river to get a few hours of fishing in. A pretty darn cool way to grow up if you ask me. Later in my youth came my obsession for the big Kenai River Kings and the monster rainbows.  I could write whole books on chasing these two species.

I barely made it through high school because of trips in the fall to a secret spot we called the glory hole fishing for big Rainbows and Arctic Char.  Some of those days there will never be forgotten. I have so many fishing stories from my childhood that I could ramble on forever:  Falling in the River, getting charged by bears, losing big fish, running from angry moose and so much more.  I’m going to share one of my favorite fishing stories with you. The year was 1985. It was in the early spring and this was to be my first fishing trip of the year. I called my friend Dan who lived on his parents homestead on the middle Kenai and asked him if he wanted to go fish.   His house was situated high on a bluff over looking the Kenai and one of the most notorious big king holes on the river.  His response was,  “its to early in the year, no kings in the river yet”  plus it was a long walk down to the River and cold.   However, he also said if I wanted to go without him to come on out! So I grabbed my rod,  jumped in my old truck and drove out to Dan’s house. When I arrived, I again try to convince Dan to go with me but he is not budging. As I’m heading out with a smile on his face he says, “by the way,  your rod and reel are not big enough for these fish out here.”  I laugh and continue on,  confident in my gear.

After a long and tiring trip I arrived at the river, and I survey the water conditions. I am immediately disappointed because the water is extremely low and the normal spot where you would fish is nothing more than a dry sand bar.   Right away I’m thinking Dan was right.  It is to early in the season and surely there will be no kings in the river yet and especially up here because there’s just not much water. What to do?  I see the main channel is flowing good but it’s way out there and I’m cut off from it by a small ribbon of water which flows along the bank and then a large sand bar.  I could wade the small ribbon channel but because of the long walk to the river I had decided not to wear my hip boots-bad choice! My rod is a little large for Trout but I decide since I’m here I might as well fish the small ribbon channel and see if I can catch a rainbow or maybe a sea run Dolly Varden.

My gear is awful big for trout but I figure some salmon eggs will entice them to bite anyway if there is anything in this small piece of water. With rod in hand I move to the edge of the water.  It looks like the deepest spot is just 8-10 feet out from me I strip out some line and just flip out my gear to make a short drift. There’s good current and the drift feels good. I pull up and make another drift again feels good.  I pull up and throw for my third drift.  My bait hits the water and disappears out of sight, then moves maybe a few feet when all of the sudden all hell breaks loose.  Directly in front of me a King the likes of which I’ve never see-to this day- jumps completely out of the water directly in front of me,  “Oh shit!” is all I can think.  This thing is huge and he is pissed: he heads straight down river at a high rate of speed just smoking line off my reel.

I know I have to chase him so I start running full speed down river and the king is still peeling line down and out continually getting farther out into the main channel. Pressuring as hard as I dare he begins to slow down and gradually I’m moving down stream and getting my line back on my reel. It comes to a stop directly out from me, maybe about 100 feet, and I’m pumping and reeling, pumping and reeling and ever so slowly gaining on him.  For a few brief minutes I’m thinking I’m going to land this beast-this monster- a world class fish.  Maybe the record he’s so huge.   I can see my picture in the paper already, I’m sweating bullets and nothing else in the world exists at this moment, it’s just me and him and I think I’m winning. Ever so slowly I keep working him towards me and I’m actually getting him within reach maybe 30 or 40 feet out.  He starts to rise and rolls in front of me.  His back goes on forever and I’m just blown away at the size of this fish. Be cautious, go slow tight line- this is all rushing through my head. You could cut the tension with a knife. And then,  it happens, he’s not done he was just giving me a false sense of security.  He takes another enormous jump and heads for the opposite side of the river.  Then what I feared most, he begins going upstream willing to fight me and the current he’s not tired at all. Now a half mile below where I hooked him I turn and start to cover the same bank in the opposite direction except this time I’m not gaining line the monster is getting farther and farther away.

A walk soon turns to a jog which then turns into a full sprint.  And he is still gaining, my spool is getting smaller and smaller.  I know I have to put more pressure on this fish as running is futile because he is just too fast.  I stop running and put my hand on the spool and begin to bear down, still he is gaining.  I put more pressure and the line is singing anymore pressure and it will snap. “Oh crap!”  I see my spool metal showing.. Shit….Shit… Powww and he’s gone.  The dream is over and the heartbreak starts to set in. Years later, writing this story I still get goose bumps and think…. “what if I had landed that fish?”  I’m not sure how big he was but I can say this much, he was something very very special.  A King like I’ve never seen.  Ive been guiding since 1987 landed thousands of kings with three in the 80lb pound class and hundreds in the 50-70 pound class and never have I seen one the size of that fish.

Ten days later, May 17th, 1985 Les Andersen landed the “all tackle” World-Record king, hmmm? There were some big boys moving through that spring. Oh, when I got back to Dan’s house he saw my reel empty of line laughed and said I told you so. In 1987, I started Jim Rusk Fishing and have guided anglers on the Kenai and Kasilof Rivers every summer since. It’s been a great run.  I’ll never be rich most likely, but I have no regrets. No matter how tired and wore out I am I always jump out of bed excited to to see what the day will bring and there’s been allot of unbelievable days that’s for sure. The older I get the more I appreciate the little things like first light peaking through the trees on a cold crisp morning as I fly down the river in my river boat or the call of a yellow leg snipe as it forages the shore line for food or maybe the smile on the face of one of my customers as they peer over the side of the boat to view a fish in the net he or she has just landed.  How do i put into words what the river and this place mean to me?   It’s words like magical, spiritual, amazing, inspiring.  It feeds my family, it provides a living and it gives us a playground and precious memories that will never fade.   I guess if I had to pick one word which describes the river for me it would be- Home! 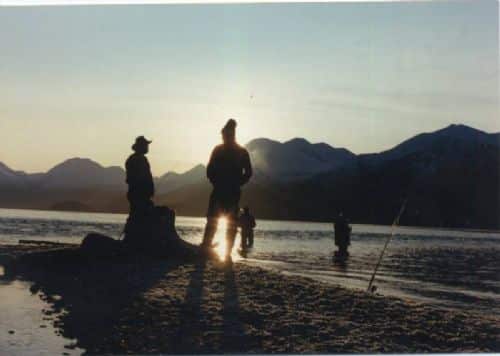