Adults usually weigh 8 to 12 pounds and are 24 to 30 inches long, but individuals weighing 31 pounds have been landed. Adults in salt water or newly returning to fresh water are bright silver with small black spots on the back and on the upper lobe of the tail fin. They can be distinguished from Chinook salmon by the lack of black spots on the lower lobe of the tail and by their white gums; Chinook have small black spots on both tail fin lobes and they have black gums. Spawning adults of both sexes have dark backs and heads with maroon to reddish sides.

Sockeye salmon are one of the smaller species of Pacific salmon, measuring 18 to 31inches in length and weighing 4-15 pounds. Sea-going sockeye salmon have iridescent silver flanks, a white belly, and a metallic green-blue top, giving them their “blueback” name. Some fine black speckling may occur on the back, but large spots are absent. Sockeye salmon are prized for their firm, bright-orange flesh.

As sockeye salmon return upriver to their spawning grounds, their bodies turn brilliant red and their heads take on a greenish color, hence their other common name, “red” salmon. Breeding-age males develop a humped back and hooked jaws filled with tiny, visible teeth. Juveniles, while in fresh water, have dark, oval parr marks on their sides. These parr marks are short-less than the diameter of the eye-and rarely extend below the lateral line.

Pink salmon are the smallest of the Pacific salmon found in North America weighing on average between 3.5 and 5 pounds, with an average length of 20-25 inches. As with all members of the salmon family, pink salmon are coldwater fish. They are also the most numerous Pacific salmon and have been harvested and canned commercially in Alaska since the late 1800’s. Young pink salmon are completely silver without any dark vertical bars or spots. In the ocean, adults are bright greenish-blue on top and silvery on its sides. They have very small scales and pink flesh. As adults get closer to returning to fresh water, they develop a lot of large black spots on their back and all over their tail. When pinks approach their spawning streams, males turn brown to black on their back with a bright white belly. Females have a bright white belly but turn an olive green with dusky bars or patches that can be lavender or a dark gold. By the time males enter the stream where they will spawn, they have developed a very large hump, and hooked jaws called a kype.

Chum salmon, also known as dog salmon, are the most widely distributed of all the Pacific salmon and generally occur throughout Alaska. Like most other Pacific salmon species, chum salmon spend most of their life feeding in saltwater, then return to freshwater when mature to spawn once in the fall then die. Most chum salmon populations do not travel far upstream to spawn; however, some travel up to 2,000 miles upstream to the headwaters of the Yukon River. Although generally regarded as one of the less desirable species of salmon, in Arctic, Northwestern, and Interior Alaska, chum salmon are highly prized as a traditional source of dried winter food. Since the 1980s, commercial chum salmon harvests in Alaska have more than doubled as a result of the Alaska hatchery program and increased foreign sales.

During their brief freshwater residency, chum salmon fry have 8–12 vertical, uniformly-shaped and -spaced dark bars (parr marks) typically not extending below the lateral line. Overall color is dark greenish-brown along the back and pale iridescent green below the lateral line. Since they commonly migrate to sea soon after hatching, juvenile chum salmon are usually only 1–2 inches long by the time they leave freshwater.

Ocean-stage chum salmon are metallic bluish-green along the back and above the lateral line with profuse tiny speckles often present, though not resembling the larger spots of Chinook, coho, or pink salmon. The tail is highly forked, more so than other species of Pacific salmon, and is not spotted. The tail also has silver streaks along (but not between) the fin rays. As adult chum salmon enter fresh water to spawn, both sexes’ color and appearance change dramatically. Males lose their silvery appearance and take on a dark olive to brown coloration with red to purple wavy vertical stripes. They develop a hooked snout (kype) lined with large canine-like teeth. Females become brown to grey colored with a broad dark horizontal bar running along the lateral line. Females also develop kypes and canine-like teeth, though less noticeably than males. 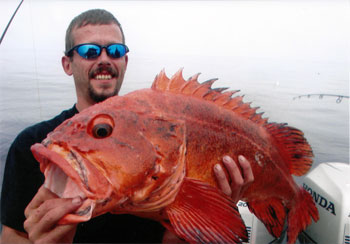 Anglers have been participating since the 1960s in the ADF&G Trophy Fish Program, which gives special recognition to anglers taking fish that meet minimum weight (trophy certificates) or length standards (catch-and-release certificates) within a species. Trophy fish for both certificates must be legally caught from waters open to the public, in compliance with current ADF&G sport fishing regulations.

Minimum weights for trophy fish certificates are listed on the table below (second column). Entries must be weighed in the presence of witnesses and a Trophy Fish Official, on a scale currently certified by the Division of Weights and Measures.

At least one witness is mandatory, as is a photograph.